By improperly using this machine, the air cushion becomes part of an instrument, which looks like a gigantic children’s bagpipe. The huge flow of air makes it possible to activate the Recorder Flute Asylum. A mass of abandoned, unused recorder flutes donated for the project.

The sound it produces tends more towards that of a dysfunctional organ.  An ominous continuous interplay of recorders, which after an agonizingly long period of silence, is finally revived.  A personal and wry echo to a forced musical expression and a lost musical sensation during adolescence.

As the recorders are connected with the bag the space is increasingly filled by sharp sounds that dull each other, dissolve into each other.

The whole becomes a spatial experience in which the sound world changes as you move through the space. You distance yourself from certain sounds and new sounds creep in. As a spectator, you can determine your own soundscape. 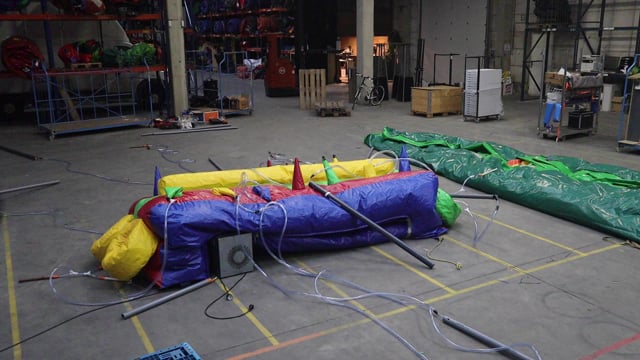