NYC club movement Dizzy Ventilators was born in Fall 2008 as the brainchild of Yusuke Yamamoto and Daniel Jodocy. Yamamoto, on keys and dub, is known as one of NYC’s finest multinstrumentalists, performing with other downtown fixtures like Chin Chin. Jodocy, on drums, is the inventor of the “musical suitcases”, built from materials found on the streets of New York, that make the Dizzy Ventilators sound so inimitable. The suitcases have also been featured by John Zorn’s finger pocket concierto as well as recorded for Zadic (Zorn’s record label) with Kenny Wollesen’s band Wollesonic. Both Jodocy and Yamamoto have had previous experience with dance music success, having collaborated with the band Brazilian Girls on their Grammy Nominated third album, New York City. With their debut album, Service Check In, available at Nublu Records, Dizzy Ventilators are making a name for themselves as a duo both abstract and simple, extraordinary and the same. There is no real genre of music that can define what they play, because each track is composed of many different textures. This happening sound is built out of New York. Being audience to Dizzy Ventilators is a nonexclusive and universal experience. It is music for everyone – a new wave of inspired imagination. 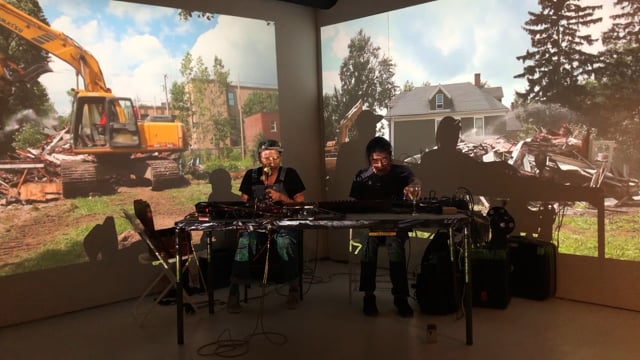