Detours often lead to more thrilling goals because they open up new perspectives. Franz Hautzinger has taken long and bendy detours and turned to many dead ends, he has spent years without instrumental activity and has made a hopeful new start. All this, those victories and defeats, this “History from the Total Crash to ‘Emergency Individualism’”, as he himself described it, made Franz Hautzinger the highly profiled musical personality that he is today.

Born on March 11, 1963 in Seewinkel, Burgenland, a Hannibal Marvin Peterson concert at Jazzgalerie Nickelsdorf was the young trumpeter’s “awakening experience”. He studied at the Jazz department of today’s Art University in Graz from 1981 to 1983 until lip palsy forced him to take a six year total break from trumpeting. After moving to Vienna in 1986 he started in 1989 to explore the trumpet in his very own and un-academic way. He became attached to the circles around Christoph Cech and Christian Mühlbacher, played in the Big Band “Nouvelle Cuisine” and the octet “Striped Roses”; the CD “Zong of se Boboolink”, which he recorded with saxophonist Helge Hinteregger and which was influenced by sampler collages was the first personal CD statement. His 10 month stay in London provided new ideas and contacts, amongst others Kenny Wheeler, Henry Lowther, John Russel, and Steve Noble. Hautzinger assimilated the stimuli in very different ways: in „Regenorchester“ („Rain Orchestra“) with its changing instrumentation, in the quartet with Helge Hinteregger, Oren Marshall and Steve Noble as well as in the trio “Speakers’ Corner” with guitarist Martin Siewert and drummer Wolfgang Reisinger.

The conscious decision to avoid electronic sound sources but to still comprehend the development of digital music on the trumpet – the quarter tone trumpet purchased in 1997 – were decisive stages for the creation of Franz Hautzinger’s sensational solo trumpet CD “Gomberg” (2000) on which he presented this new until then unheard cosmos of sound that he had developed on his instrument. Hautzinger positioned himself with “Gomberg” at the front line of the international improvisation avant-garde; collaborations and CD records with Derek Bailey, the “AMM” veterans Keith Rowe and John Tilbury as well as Axel Dörner, Christian Fennesz or Otomo Yoshihide, and Sachiko M followed. The step into the world of decelerated sound microscopy and from 2003 on the re-discovery of musical sensualism, the confrontation of his trumpet sounds with groove and tunes (“Regenorchester XI” and XII) can be considered as important stages in his development. Franz Hautzinger teaches at the Vienna Music University since 1989, is a member of the Berliner Ensemble “Zeitkratzer” since 1999 and received comissions from Klangforum Vienna amongst others. He is a globetrotter whose unmistakeable musical signature is known from Vienna to Berlin, London to Beirut, or in Tokyo, New York, and Chicago. Franz Hautzinger has shown that even in times where postmodernism is history an instrument can still be reinvented. (Andreas Felber, translated by Astrid Donaubauer)

Mazen Kerbaj was born in 1975 in Beirut and lived there since. His main activities are comics, painting and music. After a lot of works for different publishers and magazines, it is in March 2000 that he releases some of his more personal works in his Journal 1999 (a dairy in comics’ format). He self-published eight other books and many short stories since.

It is also in 2000 that he plays for the first time in concert, in the Strike’s pub in Beirut. This concert, a duo with Lebanese sax player Christine Sehnaoui, is probably the first improvised music concert in the Middle East.
In 2001, together with guitarist Sharif Sehnaoui , he creates the MILL association that curates since IRTIJAL an annual international festival for free music in Beirut as well as various concerts and events (IRTIJAL saw over the years some great improvisers like Fred Van Hove, Johannes Bauer, Lê Quan Ninh, Franz Hautzinger…).
In august 2002, together with Sharif Sehnaoui and double bass player Raed Yassine he recorded the album A published by La CD-Thèque, Beirut.
After meeting Franz Hautzinger by chance in Lebanon in February 2003, they played in duo in Beirut and in Paris and in trio with Japanese laptop player Taku Unami at the IRTIJAL 2003 festival. Then they were joined by Sharif Sehnaoui and Helge Hinteregger to form Oriental Space quartet that played in Nickelsdorf, Berlin, Vienna and Klagenfurt. A recording of this group is avilable on the Austrian label aRtonal, and Abu Tarek, a recording of the duo Hautzinger/Kerbaj is available on the Portugese label Creative Sources.

In 2005, Kerbaj releases 2 new albums on the Lebanese newly born label Al Maslakh (The Slaughterhouse), one in solo and the other with Rouba3i quartet. 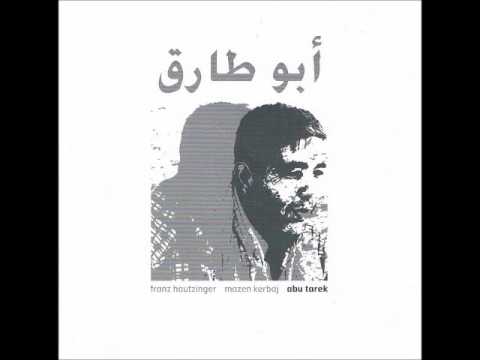