The sounds of each leaf of regional deciduous trees by scientifically sensored data-sonification are much more musical than one could imagine. Their timbre and volume always depend on light and temperature, number of audience. It varies from site to site and from country to country. We can hear loops of rhythmic sequences, groups of tiny computer generated signals, long drones which change constantly and are hard to describe.

During the Cologne Tree Sound Study, we made the recording in a small office room in 2015, we had less dramatic weather changes. A warm summer, smooth light changes, generating a more gentle soundscape to deeply plunge into music. (Georg Dietzler)

Plein Air the album is based on a ten-year artist-led project. In simplest terms our intention is to provide a ‘mind/body experience’ of trees by attending to the sound of physiological reaction (photosynthesis and transpiration) as one leaf adjusts to the day to day changes (rush hour traffic, crowds of people) in ground level atmospheric chemistry in venues and cities. Physiological data is transposed into sound through computer software. We have chosen sound for its aesthetic purity with the goal to hear the trees more clearly as they react to changes in CO2, temperature and humidity. This system is called ‘Plein Air’, a stable single platform system that embraces the portable easel, as a metaphor for the historic practice of open air painting. Where Millet extended the idea of landscape to peasants working in the fields and the impressionists examined the phenomenological exchange between light and material. At the same time, recent work with the system raises questions about what we expect to ‘hear’ when we listen to nature, as it reacts to intense inputs of carbon dioxide?
(Tim Collins)

few album are available during the festival

Side 1 are  four short recordings, in total twenty-six minutes, of one leaf from Scottish Elder, Oak, Elderberry & Birch, recorded in one of Glasgow’s historical green houses, June 2017. Due to dramatic fast light changes between sunshine and cloud formation the computer generated music is highly dynamic, an intense hearing experience as I imagine a tornado.

Side 2, one recording, in total twenty-five minutes, of a regional heritage pear tree leaf sounds more like Minimal Music. During Cologne’s Tree Sound Study, recorded in a small office room in 2015, we had less dramatic, smooth light changes, generating a more gentle soundscape to deeply plunge into music.

Infos about the artists

Sound Programmer: Chris Malcolm is a Scottish computer programmer and software developer with over twenty years of experience writing computer code with vector graphics, sound and interactive systems for industry clients. He also has an extensive background in experimental music developing innovative tools and instruments for studio and live performance. Malcolm is recognized within the electronic music scene for his use of retro-computers and consoles to generate unexpected interactive audio and visual experiences. The work with Collins & Goto Studio is driven by a curiosity about human relationships to technology as a tool and as an interface to bio-events. The PLEIN AIR system and software opens up new programming challenges and levels of expression not available with traditional electronic instruments and methods.

Producer: Georg Dietzler is a Cologne-based artist, author, curator and consultant. He is recognized as an active producer of cross-disciplinary cultural projects, exhibitions, seminars and conferences, audio-visual concerts, media, dance, improv-theatre, and more. As a socio-political and conceptual artist with an international reputation, he works on ecological future visions linked to social and political change. His latest art work is a concept for an inner-city citizens’ heirloom orchard, introduced at ‘Ecovention Europe’ at De Domijnen, in Sittard Netherlands in 2017. 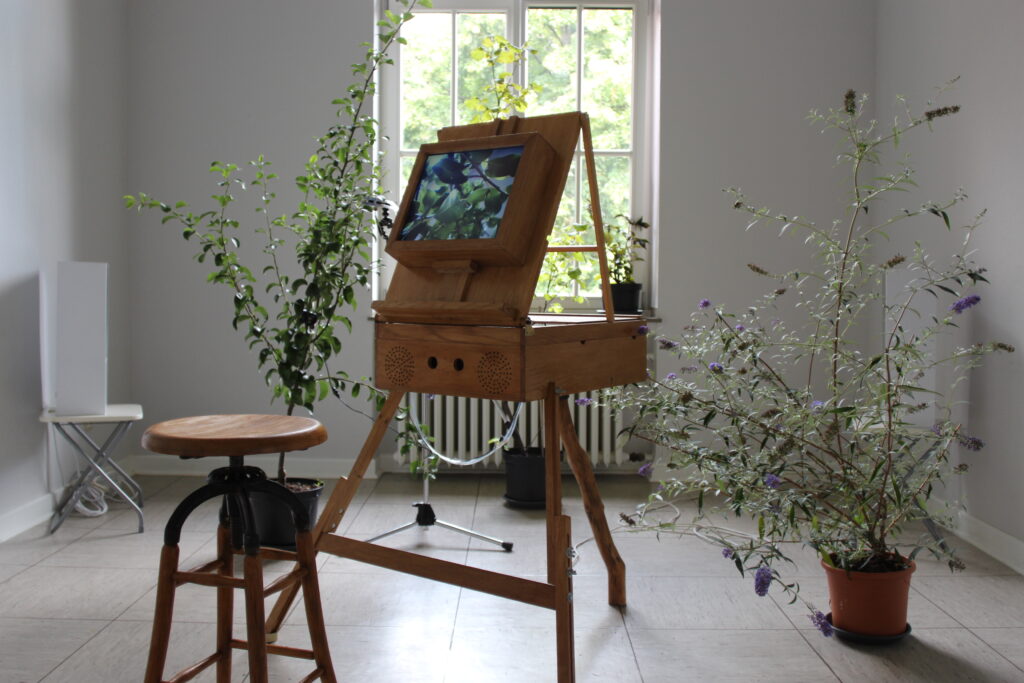